See the photo review: what’s in the pinpointer box. I wonder whether the buttons on the top end cap were of the Turkish manufacturer’s special devising. Are these ones more reliable? 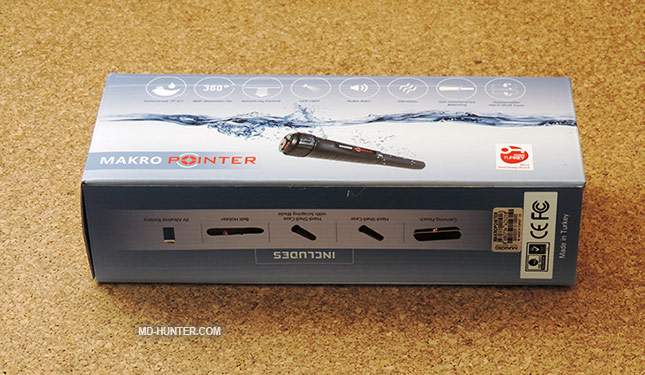 Here’s the Makro Pointer. Inside the box, you’ll find this carrying case… A great supplement to the pinpointer! It’s a semi-hard case, with the loops allowing attachment of a shoulder strap (supplied). 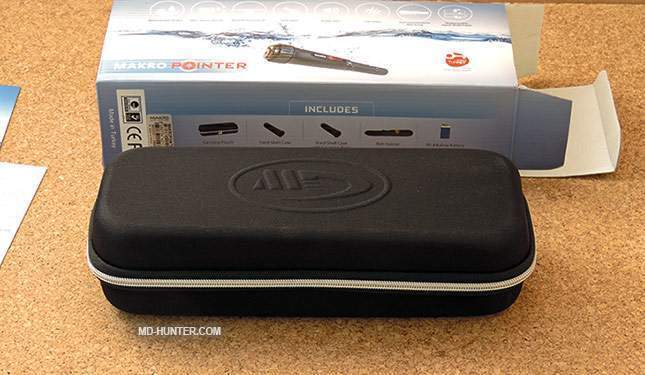 Maybe someone will carry his pinpointer in this case. But I have other plans for the latter. The foam filling (where the pinpointer is lying) can be taken out. So I get a perfect container for batteries, replacement bolts and other metal detecting sundries. 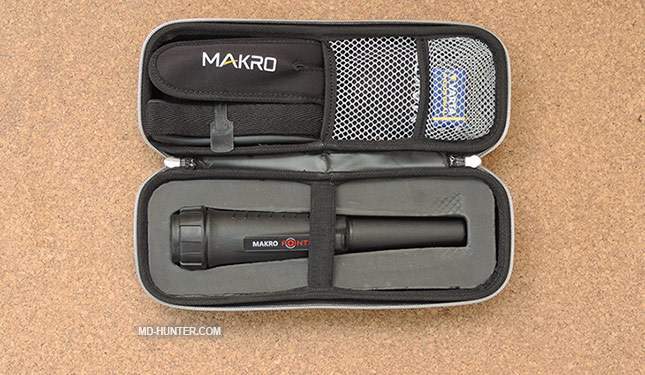 The Makro Pointer package includes the pinpointer, two replaceable hard shell covers (one smooth and one with a scraping blade), finds pouch (a cool thing, the Makro Racer metal detector comes with the very same one), belt sheath, battery and shoulder strap. 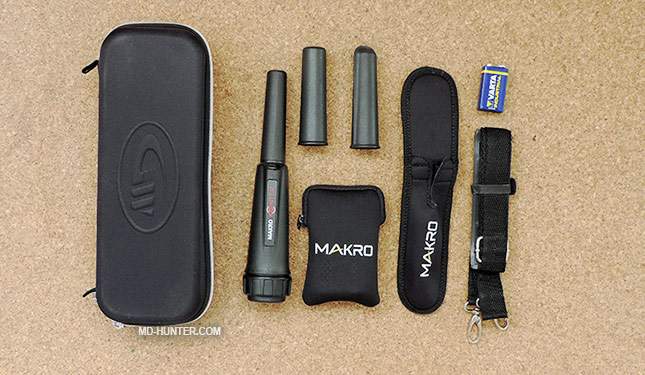 On one hand, it looks like a classical pinpointer – round, standard shaped one, with a battery compartment top end cap. 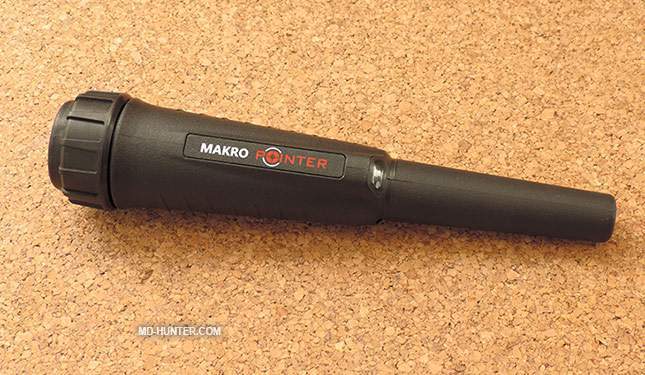 On the other hand, the Makro Pointer seems to be chubby enough (after using the Garrett and MarsMD pinpointers, but if you’ve held only the Minelab or Whites TRX in hand before then, you won’t notice its thickness). 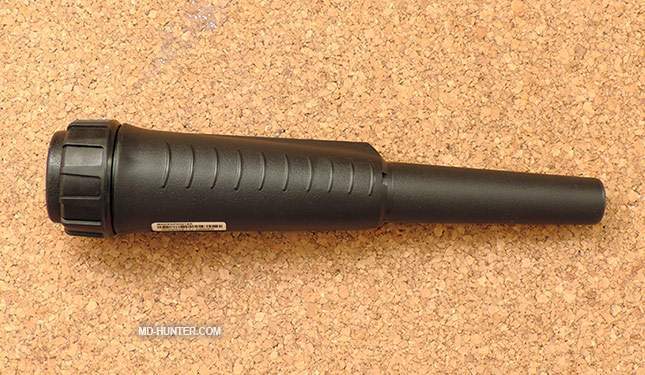 Who considers a LED flashlight to be an advantage? If there’s such a feature, it’s good. If not, it’s OK. The Makro Pointer has this one. The LED flash is hidden under the plastic lens. The most important thing is that the flashlight can be turned on/off and that’s what I really like. 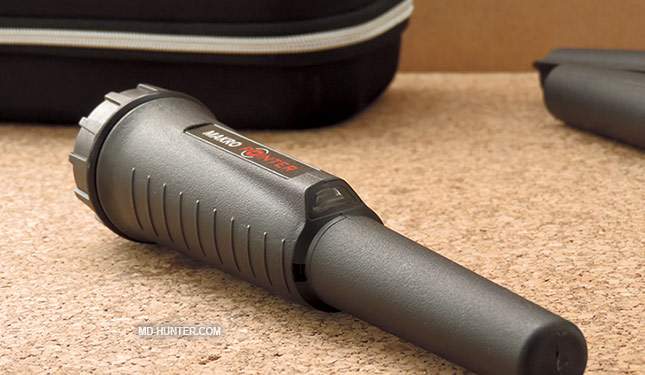 The controls are located on the battery compartment cap, so you should get used to it… There are 2 buttons: to turn the unit on/off, to adjust sensitivity (4 levels), to select Both Audio and Vibration or Vibration Only modes, to turn the flashlight on/off. Actually, there’s nothing difficult about it: after two-minute practice you’ll bear in mind all combinations (each button has its own one – a quick press-and-release, a long press-and-hold and double click). 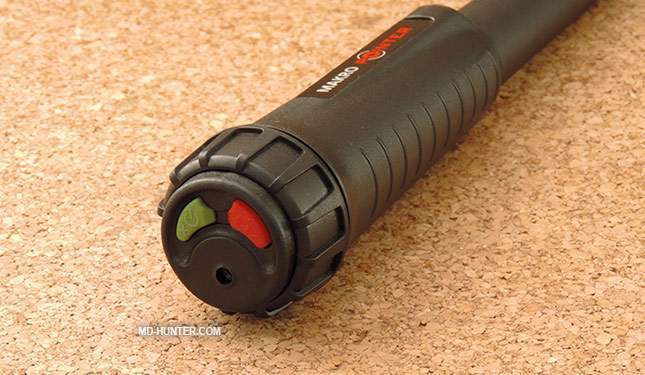 The battery compartment cap isn’t a one piece cover (as I thought). It’s fitted with a screw-on ring. Is it convenient or not? If you ask me, it makes no odds – so that the pinpointer is reliable and works as it should. 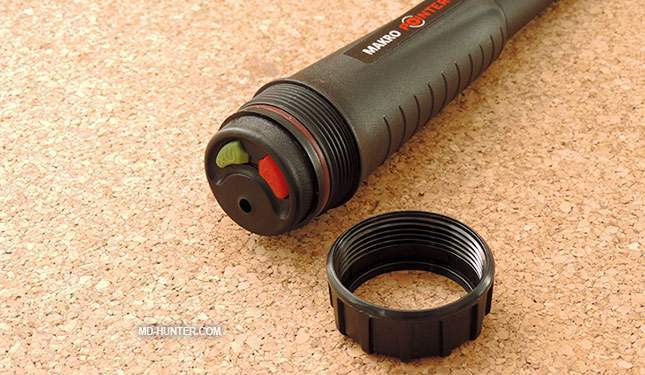 I wonder whether the buttons on the top end cap were of the Turkish manufacturer’s special devising. My digging-experienced buddy says such buttons are more reliable (than on the side of pinpointer): less accumulation of dirt, no wearing out with a glove, fewer chances of accidental activation. It may be so, we’ll see. 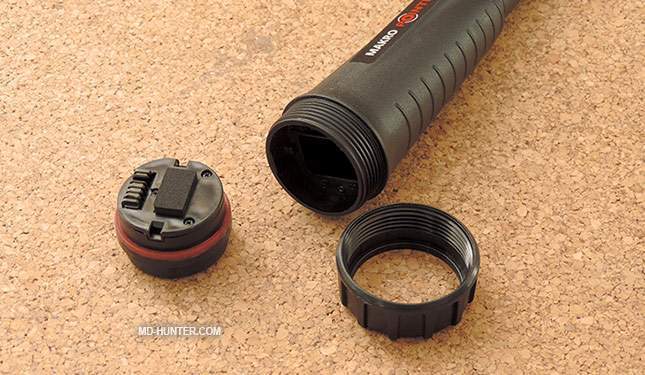 The Makro Pointer is powered by a 9V battery. Pay attention how the latter is sitting in its ‘nest’… 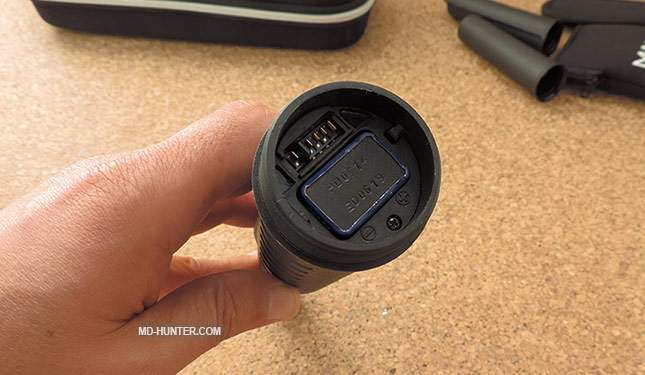 The first thing that came to my mind – what will happen if I replace it with a smooth-edged rechargeable battery? As a result, the latter fitted perfectly in place of the standard battery. I need hardly mention that the pinpointer started operating from that one as well.

The replaceable hard shell covers. An interesting solution, I first saw these just on the Makro Pointer. The solution is useful as the pinpointer tip gets scratched up all the time, thus the protection is good for it. 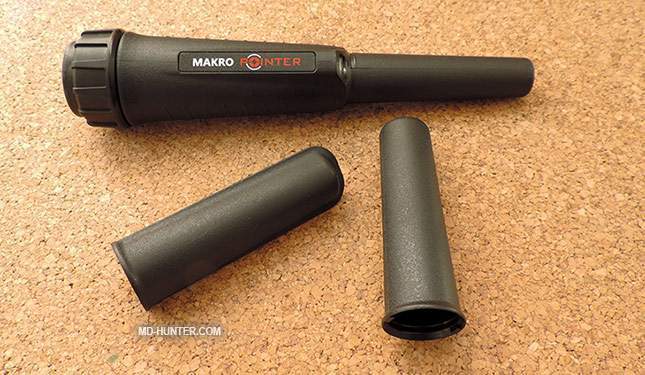 These replaceable covers can be put on/taken off easily (I expected them to be much tighter). There are 2 catches on each side. The only thing you should care about is preventing accumulation of moisture under these protective accessories. I enjoy the covers, but if they were also in color (like in the Nokta Pinpointer, its Turkey made ‘brother’), then it would be all great. 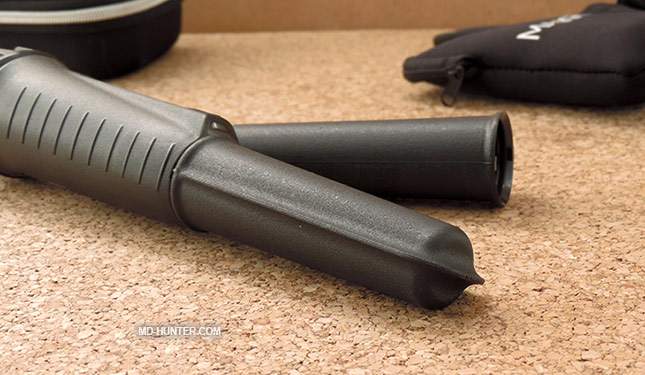 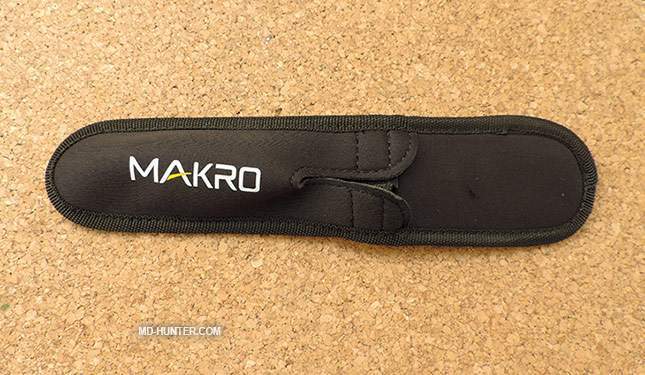 The Makro Pointer sheath certainly solves the problems somehow. If there is no other option, for the short haul, that’ll be enough. But it’s not exactly the most convenient one. I have already tried – the pinpointer fits in the classical holster from Garrett or MarsMD. 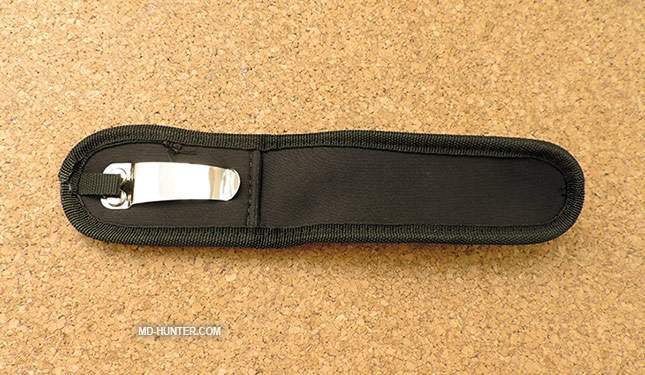 The finds pouch. This seemingly trifle thing is a good accessory. When on a hunt, I carry spare batteries and the replacement coil bolt in such a pouch. It can certainly be used to carry finds – how you used to. I used to pour my finds into the pocket. 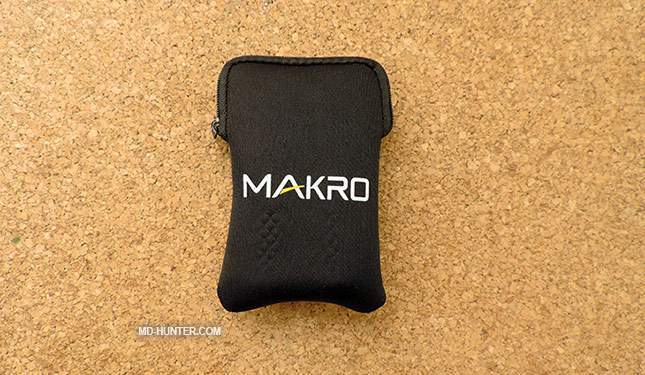 The shoulder strap for the case. Don’t you cut a tie wrap that is fixing this strap! This one has a hook & loop and can be applied to fasten the cable to the metal detector shaft. This is one more trifle, of course, but such trifles create an overall good impression. 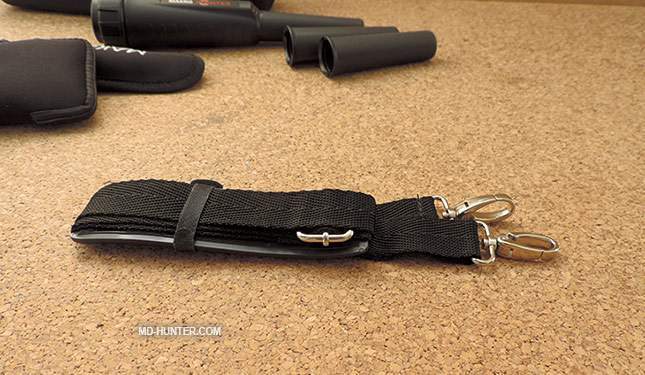 Towards the question of the Makro Pointer’s thickness… Yes, it’s a bit chubby. But everything is within a reasonable size. I will repeat myself: if you didn’t hold the Garrett or MarsMD pinpointers in hand, you won’t pay attention to its thickness. 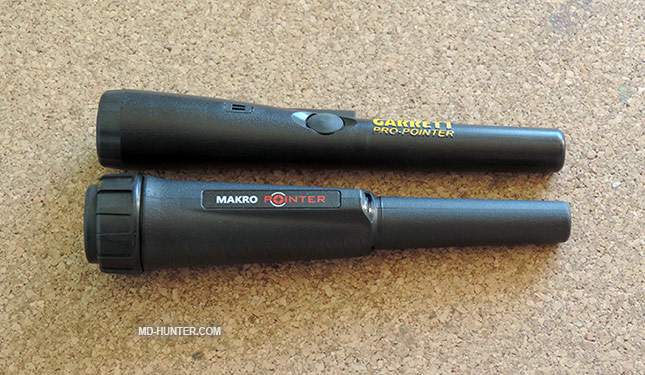 I turn the Makro Pointer on. The first thing I check is… 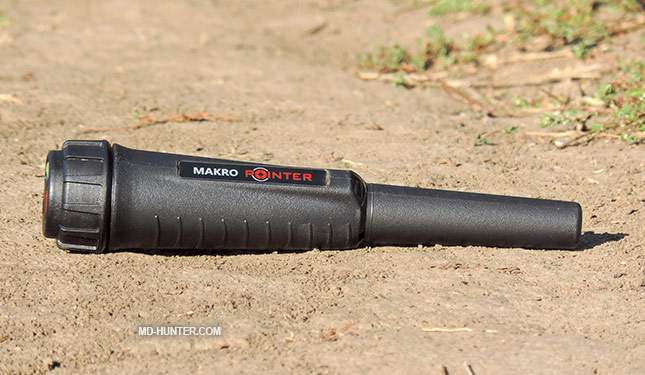 There are no false responses at maximum sensitivity (when turning upside down, knocking on the tip, shaking it). The pinpointing antenna has full side-scanning capability. The unit gives loud and adequate response. There is sound dynamics (the device changes the sound when approaching a target). I’ll try out this pinpointer while hunting and write you back about my practical impressions. 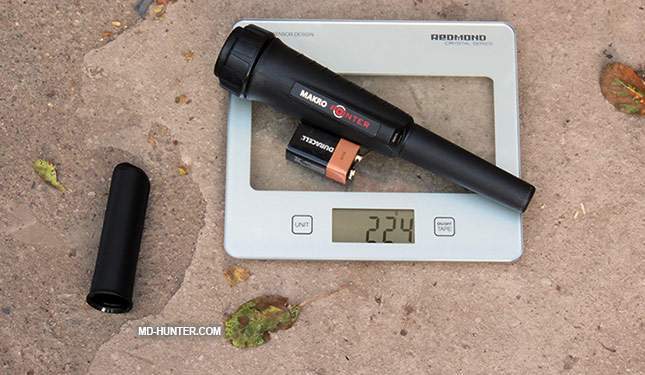 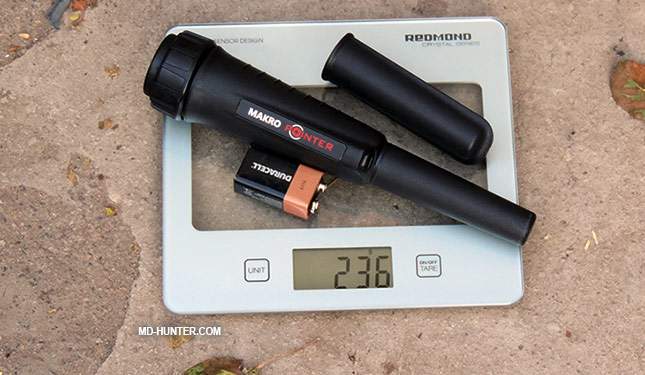 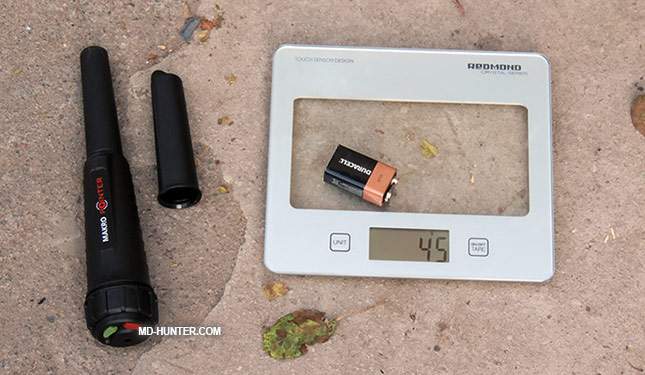 All about the Makro Pointer is collected here (news, tests, comparisons with other devices, different reviews and opinions). Plus, on Knowledgebase pages there is additional information you should know before buying the Makro Pointer. The experience of others will help you save your time and money. Happy hunting to everyone!