Here’s a warning to all Minelab Equinox 600 / 800 owners: do not try to open the detector control box. Having spent 15 minutes attempting to uncover my machine, I completely destroyed the housing. It’s a good thing that I bought 2 units at once, otherwise it would be rather ridiculous: sort of you paid your money but never went out detecting with that device. 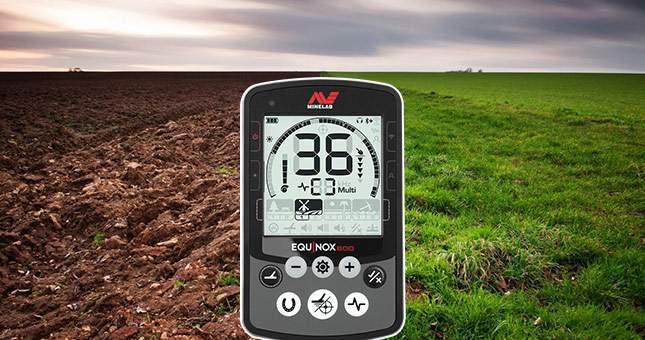 The Minelab Equinox 800 is surely mostly similar to the XP Deus. But what makes these two machines completely related is absence of aftermarket coils for them. In my personal opinion, one of these detectors which will have alternative coils available for sale first (at a considerably less price than the original) shall certainly carry all before one. Until then, we are where we are.

There have been nearly 30 pieces of screen protectors piled up in my Minelab Equinox 800 packages (in each box). These ones serve as different language labels for the settings. But first and foremost it’s a protective film for your detector screen. That amount will be enough and to spare, you surely won’t need a rain cover at all.

The machine is of convenient hand holding and at first I didn’t feel anything uncomfortable. After spending an hour hunting with it, however, my arm got tired. I felt a strong desire to put the detector into another hand. And it’s not because of the armrest. It’s all okay with the latter actually, I could not even ask for better. The issue is about the balance in the detector’s build.

It seems like Minelab have changed their technology. At least the EQX coils have become a bit more lightweight – sealed in a different way + lighter coil cover. Not a great weight loss, of course, but at any rate they started the ball rolling. Seemingly it’s the coil on a straight-as-a-rod shaft (and it’s neither more nor less than a rod) that gives an imbalance. Plus, the grip tilt angle can’t be adjusted at all.

Let’s move on to how the machine works. The first thing that comes to mind when you start trying the detector – it’s the Minelab X-Terra interbred with the Minelab E-Trac. The second, after two days of going out detecting – there is nothing outstanding about this device. There isn’t any feature in terms of which I could say that Minelab performed a miracle. Depth, discrimination, accuracy, speed, comfort. It’s just an ordinary metal detector. Moreover, I can say with confidence that if I have an X-Terra 705 with a proper coil at my disposal, I will certainly be on a level in regards to finds. The Minelab Equinox in its turn is the unit for those who have a desire to spend more than the average budget. And it will work that way as the machine is operational after all and can see finds.

Regarding the teardown. If you try to disassemble the control box, you won’t be able to assemble it back. The detector housing is 100% non-demountable. Maybe I should try to saw it? Besides, while opening the housing I heard a hiss of air – apparently it was pumped out before sealing the control box. I mean have you ever seen any other detector out of which the air was pumped before assembly? I definitely haven’t.

All about the Minelab Equinox is collected here (news, tests, comparisons with other devices, different reviews and opinions). Plus, on Knowledgebase pages there is additional information you should know before buying the Minelab Equinox. The experience of others will help you save your time and money. Happy hunting to everyone!