Comparison: Quest PRO vs Minelab X-Terra 705. Which is better to buy?

Hushed whispers are wandering among md sellers behind the scenes – folks are discussing a piece of very strange news… Greece has never been a top buyer of metal detectors. And that is quite explicable as local rules regarding private metal detecting in this country are rather strict. And suddenly… This autumn (2018) Greece bought several hundreds of the Makro Multi Kruzer machines. Such fact is so unexpected and incomprehensible as if the Turkish accidentally discovered a gold mine. Minelab managers responsible for European markets have yet to explain the Codan investors how they managed to miss such a paradoxical demand. They simply relaxed their guard whereas the Turkish turned out to be the early bird that had got its worm. 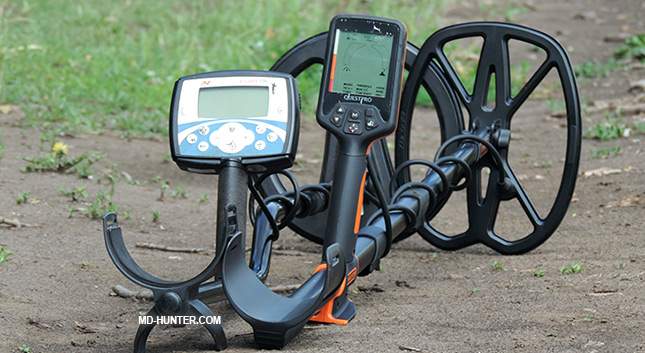 One possible explanation for this paradoxical demand on metal detectors in Greece is that beach hunting has become more popular recently. In most countries, even with the very strict “no metal detecting” rules, beaches are ok to metal detect.

Those who used to hunt, or still do, for relics of the past know that there won’t be any new finds delivery to a field. Many hunting spots already look like moon landscape, with ‘craters’ on the surface. Some holes at the most productive (in times gone by as now these ones are heavily hunted out) sites are up to 2 meters deep. Today, you should do yeoman’s work in order to unearth a valuable historical thing. And with beaches it’s quite another story. Metal detecting on a beach can bring you many good finds each year, even better, during the on-season new items go missing on beaches every day.

Those who used to hunt, or still do, on beaches know that there will come a day when you want to move from the beach to the surf. I hear you ask, ‘where is it possible to find more objects?’. Well, when you are tossing and turning while bathing in sunlight, a gold chain can fall off your neck and get stuck in the sand. If you don’t notice it, there won’t be any chance to find this item. With the surf, it’s a different story. When a wave hits the shore, it’s simple to lose an earring or a chain in it. And standing waist deep in water, it’s extremely difficult to see a missing earring underwater, even with excellent visibility. So, things can be found both in and out of water. 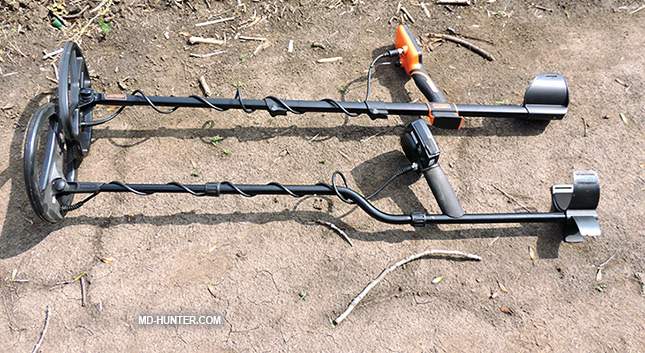 You can look for finds on the beach using the Garrett ACE as well. If the salt sand is dry, the ACE machine nicely picks up rings, sunglasses, watches etc. It doesn’t always cope with gold open hoop earrings and gold chains, although after gaining some experience with your ACE in such environment, you’ll be able to solve this task too. But still, the best metal detector for beach hunting is the one you can search with both on land and underwater. In the parlance of metal detector sellers, it is called to expand the boundaries of your capabilities. And it makes perfect sense as nowadays if you buy the device that is intended for ground search only, you are a rich man.

According to detectorists sharing their tips for successful searching, modern ground units are like a “half-baked” cabriolet car that doesn’t have a roof at all. And if you want to drive that one, you should always take into account several conditions, namely absence of rain, wind, not cold weather. So you’ll be able to enjoy driving such a car during a couple of summer months only (not every day even). The same goes for the machines built just for hunting on land. It’s sort of the detector but you can’t apply it for all search tasks.

The Quest PRO metal detector can be submerged in water up to 5 meters. The Minelab X-Terra 705 is designed for ground search only. Predictably, as the Quest PRO has been developed quite recently, and the Minelab X-Terra 705 was created in 2004. Usually, 14 years of age for a metal detector is a verdict. Minelab makes no secret of the fact that its new Equinox machines have appeared to replace the X-Terra series units. So they will sell up their stock and will say goodbye to the X-Terra, kinda ‘you surely have been a good detector, however, the world and technology are changing, you aren’t welcome in the field anymore’. 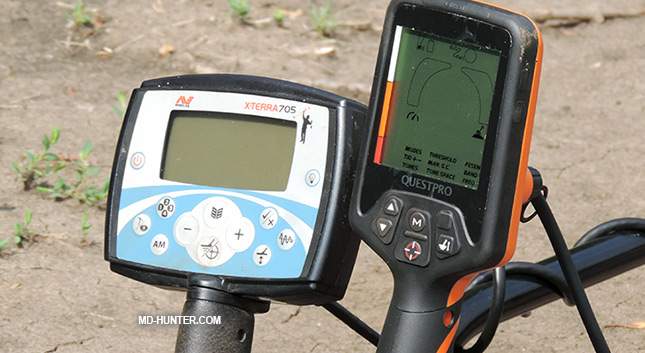 What was the Minelab X-Terra 705 valued for? It’s easy for me to write about it as I myself am a former X-Terra user. We often hear the argument that the X-Terra 705 has good discrimination capabilities. However, it is a usual sales technique. Indeed, when there was a competition between the Minelab X-Terra and Garrett ACE detectors (it’s true), the X-Terra 705 discrimination seemed to be better than that of the ACE 250. But the manufacturer is cunning. The matter is that most owners can’t fully evaluate their detectors’ operation. Whether the machine is good or not, you can judge not by finds unearthed, but exclusively by the ones you missed. An ordinary detectorist isn’t normally aware of the latter and never will – passing over his potential find without noticing something, and giving praise to his ‘digging rod’ after picking up some objects at shallow depths.

The first and main issue with the Minelab X-Terra 705 is its discrimination – at maximum depth non-ferrous targets sound like iron. It would be better if it were the other way around. But alas, a silver denarius may read as a ferrous item at a depth of 20 cm and more. And if you use the iron mask settings, the machine will simply remain silent. In 2004, when hobby enthusiasts first started trying the X-Terra units in the field, it wasn’t critical at all. Treasure hunters’ pockets were quickly and easily being filled with the finds discovered at shallow depth, so there were quite enough reasons to praise the lucky machine for successful metal detecting. But time went by, targets reached a new low in the ground, and the X-Terra problems became obvious. Today detectorists are seriously discussing how to pick up coins buried 30 cm, or even 40 cm, deep. And believe me, it’s not incredible stuff anymore. 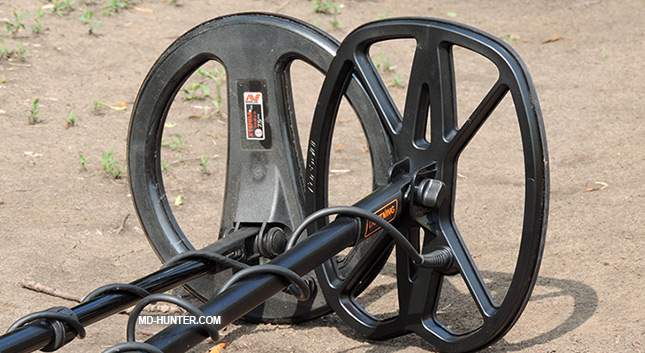 Minelab were going to make a pretty penny out of the X-Terra detector. And it worked for them in some way. The possibility of changing the detector’s frequency expands the owner’s capabilities as well. But in case with the Minelab X-Terra 705, if you want to change the frequency, you’ll need to buy a new coil. That’s about a small marketing invention from Minelab geniuses. I do sympathize with you guys who own the X-Terra machines (as you remember I was the X-Terra owner, too). You either paid three times as much because of buying additional coils, or you missed your potential finds since you couldn’t double check your hunting spot using another frequency. Then how was the X-Terra different from the ACE device? The wool was pulled over your eyes once again, and you received less capabilities than you paid for.

However, today the metal detecting world is different. The Quest PRO unit has 3 frequencies – 5, 13 and 20 kHz – so there is no need to change the coil, these are always at your disposal to switch between as you please. You may need an additional coil to the Quest PRO only because of the size – a sniper or, quite the opposite, the one for greater depth. 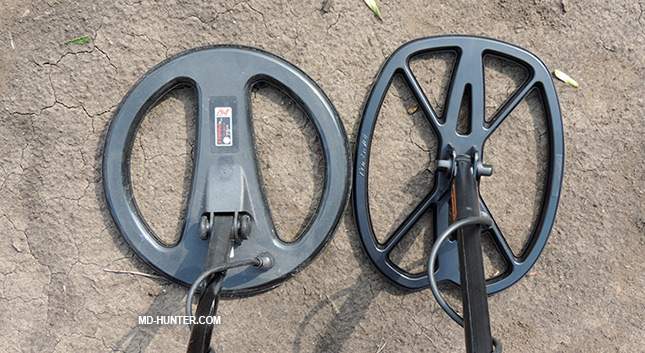 You can’t imagine how miserable it is when you have just one coil for a certain frequency. The X-Terra owners had been suffering for more than 10 years! A sniper coil to work on a 3 kHz frequency, a large steering-wheel of a coil to operate at 18.75 kHz. But if you need vice versa? The Minelab X-Terra coils business produced such fat profits that it was enough not only for the original manufacturer, but also for the alternative ones who earned some pretty good money from coils for the X-Terra. They weren’t undeterred by the expenses for decompilation and decoding of the coils’ internal codes (Minelab inserted the protection inside their coils against alternative coil manufacturers). Never mind expenses if there were many thousands of X-Terra coils sold per season. And many thousands is not just words, that’s just the way it was. Over the season, one stockist could sell a couple of thousands of the Minelab X-Terra coils. So, aren’t they geniuses? Thankfully those days are gone for Minelab and hardly ever come back again. I really hope so. 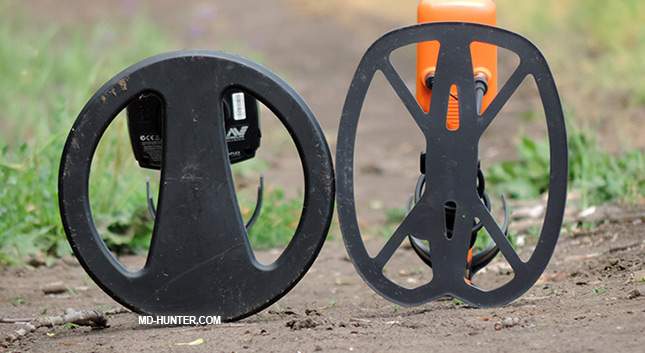 The third thing any Minelab X-Terra 705 owner can’t be unaware of is its unacceptable delayed reaction. Bluntly, the X-Terra 705 is an outright slowpoke. Again, you might not notice it 10 years ago, when finds themselves popped out of the ground into your pocket. And even 5 years ago it was still possible to pick up a decent amount of valuable objects using the Minelab X-Terra 705. If the area wasn’t trashy though. If however the site had even the slightest concentration of metal junk, that caused the user to miss potential targets at once. But, as you remember, you never become aware of the finds you missed as if they had never existed.

Today, alas, oldie X-Terra is clearly behind the impudent newbies. Probably, this is as it should be – new time brings new metal detectors. I wish you all happy hunting! Don’t stuff your head with the things you missed, let other detectorists, with obviously better machines, pick them up.

All about the Minelab X-Terra 705 is collected here (news, tests, comparisons with other devices, different reviews and opinions). Plus, on Knowledgebase pages there is additional information you should know before buying the Minelab X-Terra 705. The experience of others will help you save your time and money. Happy hunting to everyone!

2 Responses to Comparison: Quest PRO vs Minelab X-Terra 705. Which is better to buy?