The only discovery in the world… Do you know many of this kind? Take a look: here’s a Scutum shield used by Roman infantryman. The item dates back to the 3rd century AD. There are such finds which, if you happen to come across them, can make your detecting season a success… If you find such a shield, you may rest assured that both you and your descendants will live a successful life. 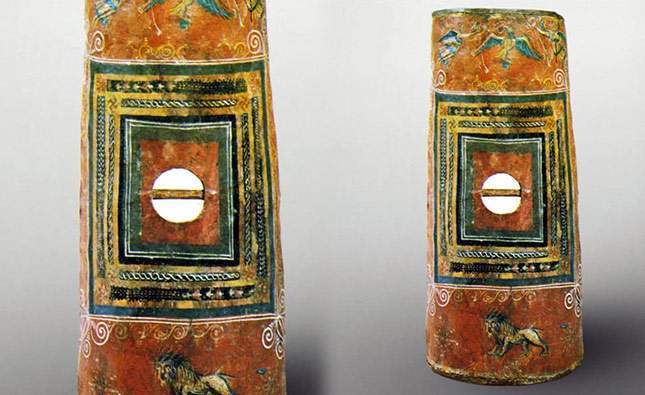 Scutum is the Latin word for ‘shield’ and is now associated with shields used by ancient Roman legionaries – with metal boss (umbo) and a horizontal grip in the middle.

This type of shield originates from Italy where it was common dating probably as far back as the Bronze Age. In point of fact, a sculptural image of the shield was discovered in one of the tombs in the necropolis of Poggio alla Guardia (8th century BC) at Vetulonia, Etruria – and it practically does not differ from the later Roman scutum. The shield was afterwards widely used by warriors from different regions – e.g., by Celtic, Iberian and Illyrian tribes. 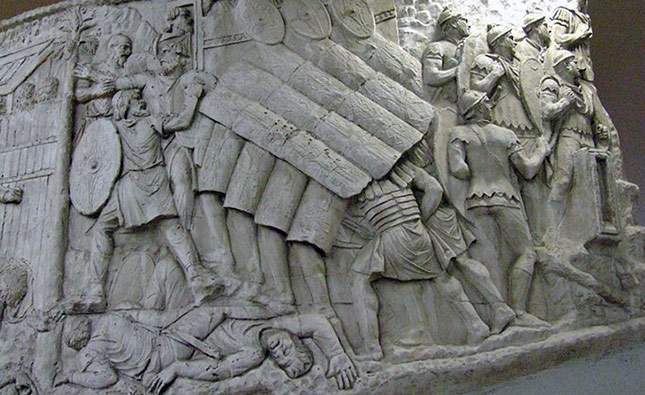 Scientists assume that Roman legionaries started to use the scutum instead of an already existing argive-style hoplite shield in the early 4th century BC (the Romans’ previous main tactics – the Greek phalanx – fell out of use around the same time). By the period of Rome’s civil wars, scutum had an oval shape with the top and bottom squared off that became completely rectangular in time.

It’s this latter type of the scutum shield that is commonly known as depicted on the monuments of imperial period. By the end of the 3rd century AD, the scutum was being replaced by a flat oval shield (so called ‘auxiliary’ shield) that retained the same name. Later in the Byzantine armies, heavy infantrymen armed with large oval shields were known as skoutatoi (‘shield-bearers’). 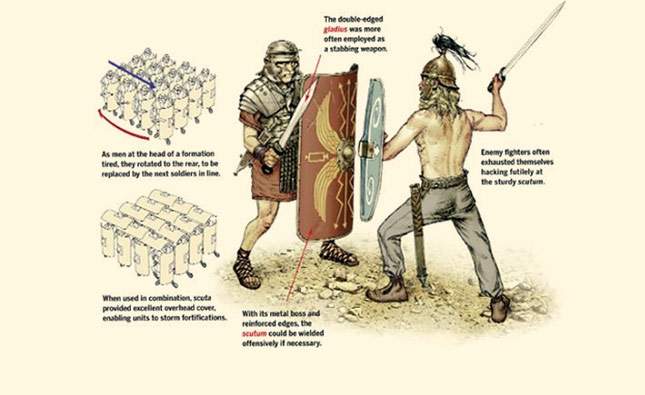 In ancient times, the scutum was an oval or rectangular semi-cylindrical body shield. The Samnite gladiators were depicted carrying an oval scutum with the top cut off. It was also common to reinforce the shield with a wooden midrib, the spina, running vertically above and below the boss to the rim. The boss was made of iron or bronze and had different shapes (metal strip, oval, ‘winged’, ‘butterfly’, etc.).

The Roman Republican scutum measured about 120 cm in length by 75 cm in width, weighing 8-10 kilograms. According to Polybios, the shield was “made of two planks glued together, the outer surface being then covered first with canvas and then with calf-skin”. An example of this type of scutum – 128 cm by 63.5 cm in size, made of strips of birch wood – was found in the Fayum oasis in Egypt.

Nine or ten thin wooden strips, about 6 cm to 10 cm wide, were glued in-between two layers of thinner strips laid out perpendicular to the middle layer. This is how the plywood construction of the shield was created. The scutum was about 1.2 cm thick in the center, while its edges, measuring a bit less than 1 cm, were slightly thinner.

Such shields were covered with felt fabric which was folded twice at the edges and stitched through the wood – and were carried by a single horizontal grip in the center. The grip of this type can clearly be seen on many Roman monumental remains. Such scutum, as Polybius describes, had an iron umbo as well as iron edging along its upper and lower rims.

Taking into account the curved shape of scutum, a single bar behind the umbo and the fact that the Roman legionary wore his sword on his right – not the left – side, it may be assumed that the shield was held not in front of the chest but on the left side of the body, and the soldier, by applying all his weight when clashing with an enemy, could easily unbalance the opponent, using his right hand for drawing his sword or dagger. 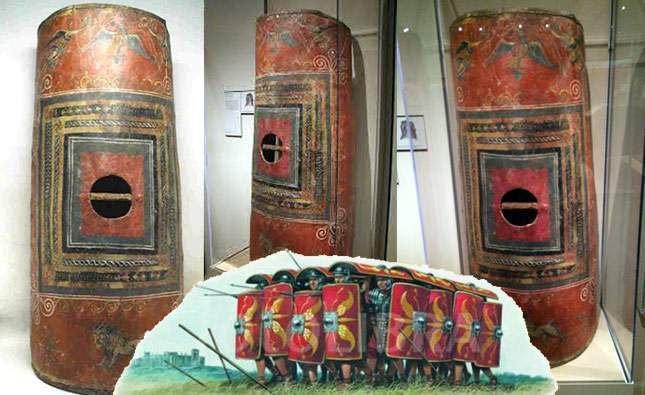 For more unusual discoveries, see here. These are different – found by ordinary, but not always, treasure hunters, with or without a metal detector.

One Response to Scutum shield. The one and only find in the world!