A choice between the Garrett AT PRO and Makro Racer is simple: in either case you will make the right choice. But do not hurry to buy these detectors, wait for spring 2016. 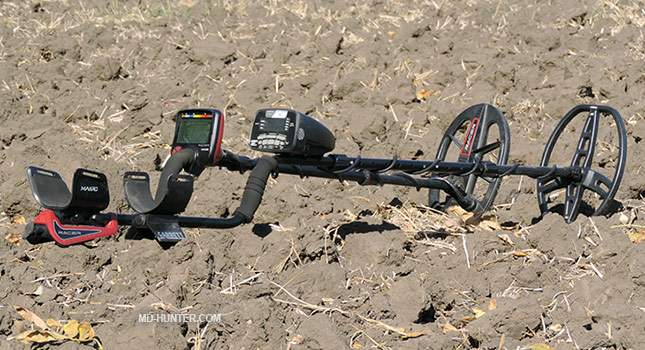 An S-shaped shaft is classical for ground search… And these are not banal words. Straight shafts with extended handles require a good balance. If something is a bit wrong, the machine starts swaying from side to side. An S-shaped shaft comprising a handgrip forgives a lot: both the coils’ different weight and armrest extension length.

Externally the Makro Racer handle looks better: it’s longer, one end of the foam grip goes under the control box, the other one is fixedly attached (so that it doesn’t show wear and the foam doesn’t spin on the shaft). 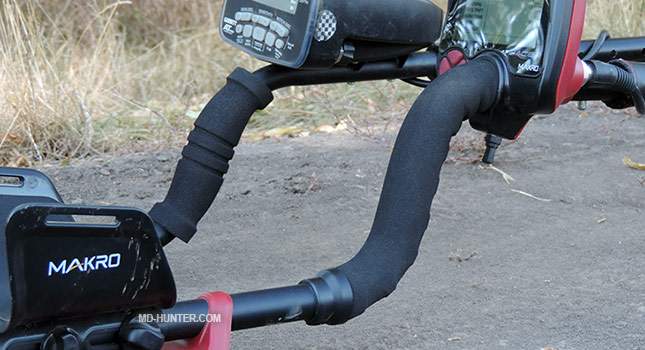 But in practice you don’t notice this anyway. The Garrett AT PRO’s simple handgrip serves its purpose as it should. 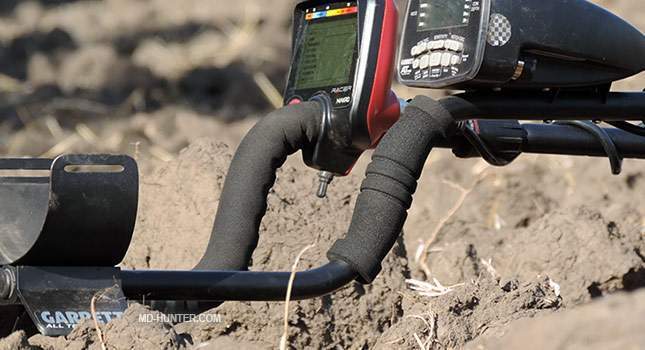 I’ve been having a non-original armrest on my Garrett AT PRO for years. I’ve gotten used to it so much that I can’t remember anymore where the original is lying around. It’s made of metal and exactly like the original (the old armrest, with no strengthening ribs). Normally holds the arm.

It’s difficult to describe why, but I like the Makro Racer armrest more: it’s convenient both for bare arm and wearing a thick jacket, the arm feels more comfortable in it. 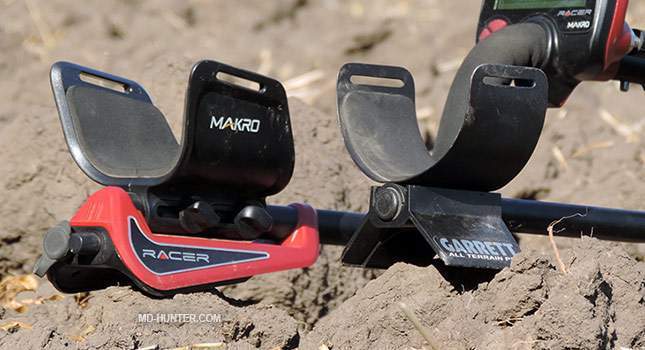 The Makro Racer armrest is attached to the shaft by two plastic bolts – if one of them breaks down during your hunt, you can remove it and continue searching.

The Makro Racer construction has some disadvantages. On the upper shaft, under the armrest, there is a battery compartment with a speaker – for this one the cover is a must-wear. When you dig up a hole and put the detector aside, the speaker grill lies directly on the ground. 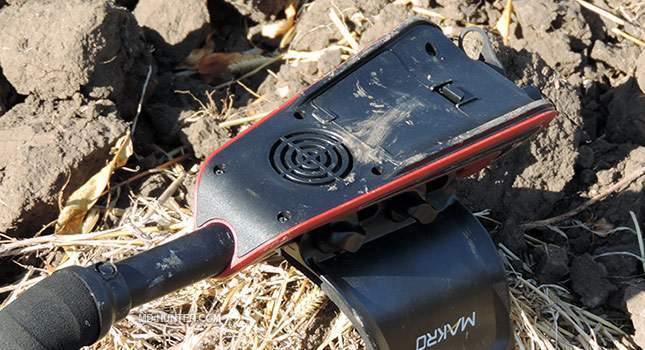 Both shafts can be disassembled into three parts – the upper, middle and lower part. Both have the locking collars. The Makro Racer locks have end-stops, whereas the Garrett AT PRO doesn’t have these ones and it’s possible to twist the Garrett AT PRO locks till the very end (when they break down). You should remember this, especially when it’s cold. On my AT PRO I always twist the locking collars without force. 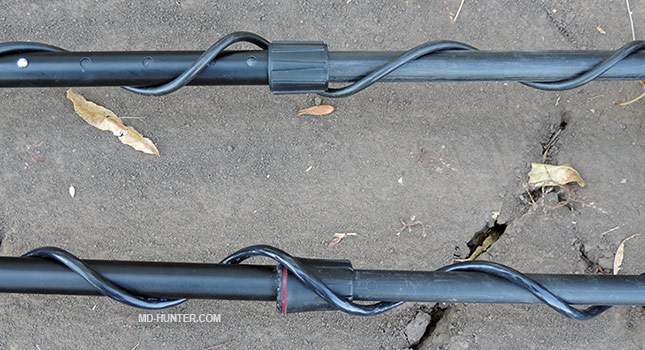 Both machines are equipped with the 11-inch DD coils. The Makro Racer comes with the 11?7 DD (RC29 DD) coil. The Garrett AT PRO has the 8.5?11 PROformance DD. Coupled with their metal detectors, both coils work great (it’s not just words, they both are really good at detecting targets). 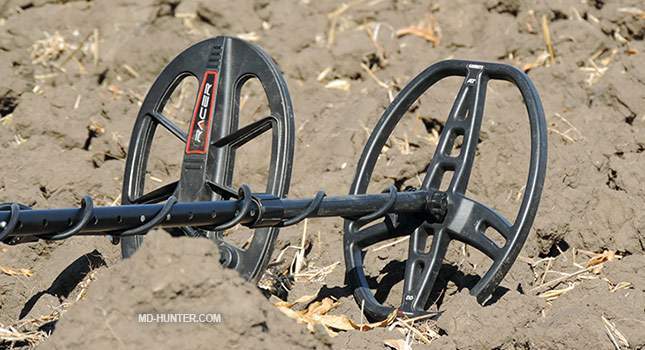 The Makro Racer coil comes with a cover. The Garrett AT PRO coil doesn’t have this one (it must be purchased separately). Personally, I don’t consider absence of the cover to be a problem. Have a look at this Garrett AT PRO coil: never once during the three seasons did it see the cover – and still works (although I didn’t take special care of it). 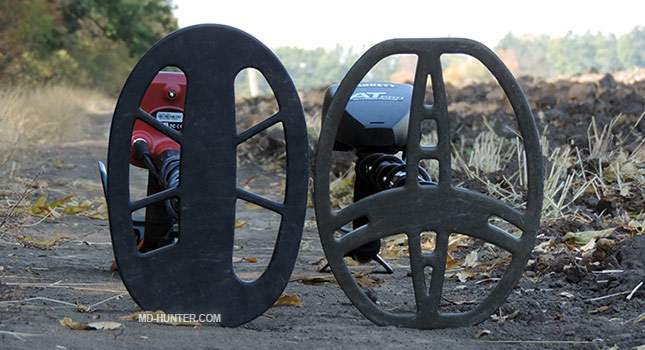 The Garrett AT PRO and Makro Racer are powered by 4 AA batteries. I haven’t noticed any peculiarities (with different batteries). Both machines work with rechargeable batteries as well. 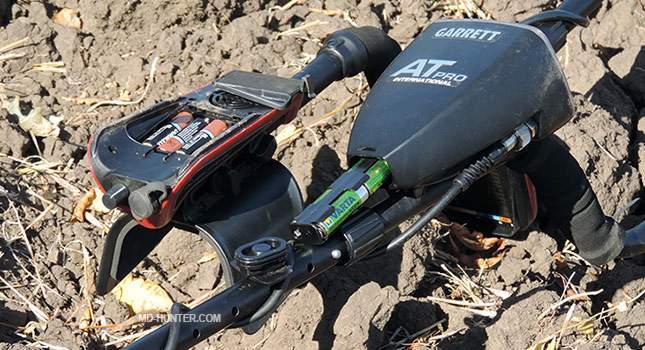 Although the controls seem to be different, it’s easy to get used to both metal detectors. The principle is one and the same… You choose the search program, adjust the ground balance – and you are searching already. If there is a signal, you use the pinpoint mode and put a coin in your pocket.

It is worth noting that the Makro Racer screen is larger and easier to read (it’s an advantage). But the buttons are located in such a way that one-handed operation (adjusting the settings) is possible using the right hand only (it’s a disadvantage). 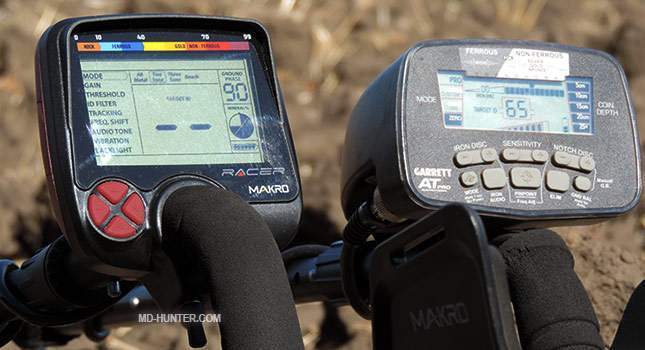 As for the metal detecting capabilities… In theory, the Makro Racer is definitely cooler than the Garrett AT PRO: ranges of settings, audio response, indication, threshold, ground tracking. But practice is the grand leveller of all the coolness, and in actual fact, one machine is on par with the other.

I will provide an example: in the Makro Racer, sensitivity is adjusted in the range of 0-99, the Garrett AT PRO has the same setting with a range from 1-8. Firstly, you will be unable to search with the Makro Racer at maximum sensitivity. With an 11-inch coil, sensitivity usually can’t be set higher than 85-87. Secondly, you have to enter the menu each time when you need to adjust sensitivity. Thirdly, after switching the detector off, you must set sensitivity again (it doesn’t remember the setting).

The Garrett AT PRO allows you to set the maximum sensitivity level and provides mostly stable operation at it (with no false responses). And you can adjust this setting on the go, just with a press of a button. Furthermore, after the Garrett AT PRO is switched off, it remembers the sensitivity setting. But the most important thing is that this setting is enough while searching with the AT PRO.

As a matter of form, the Makro Racer sensitivity has finer adjustment, in practice the Garrett AT PRO sensitivity setting is more convenient. And there are more examples of this kind… The Makro Racer has a magnetic mineralization indicator – a circle on the screen, with shaded segments. The Makro Racer’s most users don’t notice this one: it makes no difference to them whether the indicator is there or not. You ignore three values of the cursor on discrimination scale because you look at the VDI only and listen to the audio response. The Makro Racer’s multi-tone response is so ‘multi’ that you want to search only in the two tone or three tone mode.

Although some little things can’t be denied… I’ve really gotten used to the way the pinpoint mode – activated by the trigger – operates and I consider this trigger to be more convenient than the button on the control panel (there are examples when the owners of Garrett’s detectors themselves add such a trigger to their machines and create the pinpoint mode that can be activated by this one). 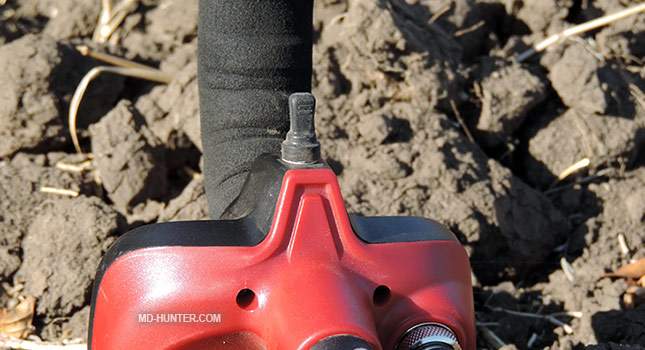 The Makro Racer has a flashlight, vibration response, screen backlight, volume control… I agree that’s all trifles. But the Makro Racer does have these ones whereas the Garrett AT PRO doesn’t (but the thing really missing from the AT PRO is volume control). 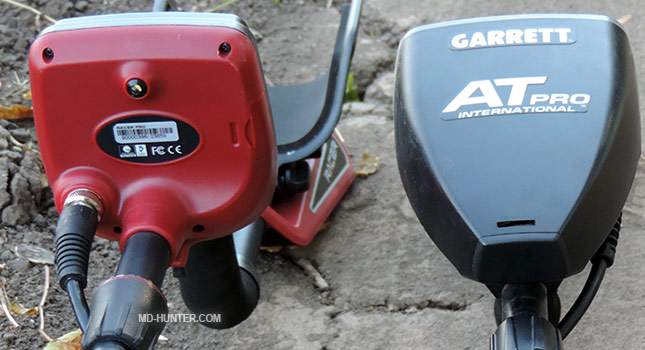 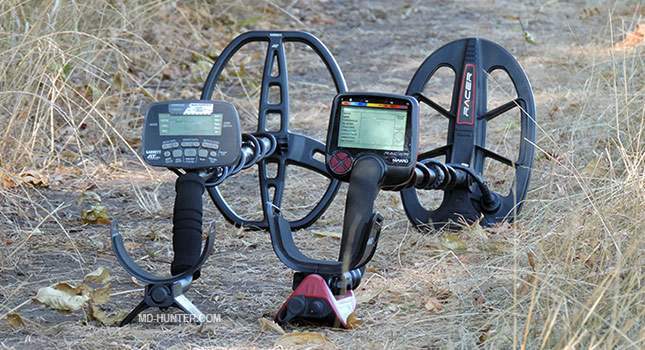 It’s just that these are two good machines, and whichever detector you choose, in either case your choice will be right. The only thing that can make them better is the second frequency. But then these will already be other metal detectors. We still don’t know what will be the name of Garrett’s new machine. However, Makro’s next step has already been announced – the Nokta Impact (the manufacturer has started a rumour that this detector will probably be even a triple-frequency one). We are waiting for spring 2016, this is going to be interesting!

All about the Makro Racer is collected here (news, tests, comparisons with other devices, different reviews and opinions). Plus, on Knowledgebase pages there is additional information you should know before buying the Makro Racer. The experience of others will help you save your time and money. Happy hunting to everyone!