If extraterrestrials are looking at our Earth through a large telescope right now, most likely they are seeing back to… the early days of the colonial period in North America. The speed of light is not too fast. It will take 300 or 400 years for an image to reach the extraterrestrial beings. But it’s quite a different story when it comes to thousands and millions of years. 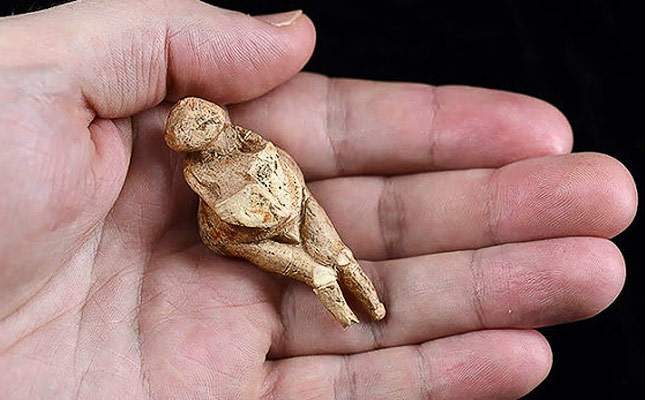 As of today, scientists think that mankind is about 2.5 million years old. The fossil evidence of our human ancestors extends back into the far reaches of those ancient times. People first began farming and cattle breeding some 12,000 years ago. Before that time, early humans had lived by hunting and gathering.

In fact, seeking for finds is gathering, too. When you feel an irresistible impulse to take a metal detector with you and go on a treasure hunt, remember that it’s your ancient instincts ))

Early humans made tools and weapons out of many materials, such as stone, bone, animal skin or wood. Any artifact made by early man was the result of extremely hard work and technological developments around the time.

Found: the figure of a woman. It’s presumably the so-called Venus. Such figures are interpreted differently by different scientists. According to some versions, these can be amulets, sacred objects used in rituals, self-portraits, or even early forms of pornography.

Material: mammoth tusk. The find is estimated to be some 23,000 years old and dates back to the Upper Paleolithic era. By that time, humans had had a wide variety – more than 20 types – of tools. During that period, there was a rapid emergence of new tool forms/technologies, such as sewing needles made of bone, fish hooks, as well as the bow and arrow. But it was long before the appearance of modern humans, the first domesticated animals also appeared much later – 10,000 years after that. By the way, do you know which was the first animal to be tamed?

Want to rejoice over our forebears? Yes, there weren’t any domesticated animals in those times. Yes, it was just a chieftain or a hunter-chief who had a stone axe. Yes, they were eating raw food. But our ancestors used a lunar calendar! It helped predict, for instance, migration times of wild animals. Even Neanderthals could keep track of the seasonal movements of game species. And how about you? Are you able to determine anything based on the moon?

Also, Upper Paleolithic peoples had bone flutes, the first intentionally produced musical instruments. That’s what the ancient times were… Early humans in the caves didn’t have domestic animals, but enjoyed nude Venus figurines and music playing. Unfortunately they didn’t have anything to drink in those days… I wish all of you happy hunting trusting your ancient instincts!