Are you willing to dig up the graves? An amateur treasure hunter unearthed a neck-ring in a field in Cambridgeshire, UK. Made of gold, weighing 730 grams. As for its type, it’s really a gigantic find that is presumably more than 3,000 years old. See the photo: this is a treasure hunter’s true fortune. 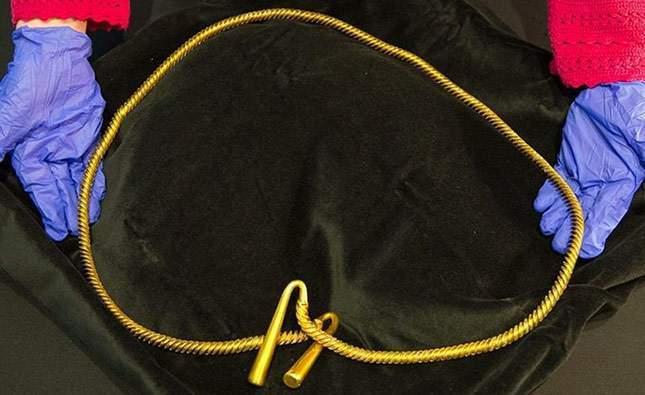 The story of the find starts with the fact that a metal detectorist discovered a Celtic grave. What’s your attitude towards the graves found while hunting? Will you continue digging? The British detectorist didn’t puss out – and was amply rewarded by the items recovered. One of them was a gold neck ornament weighing 730 grams.

The finder informed museum employees about his discovery. Celtic neck-rings are known as torcs, from the Latin word torques meaning ‘to twist’. For instance, the Celtic god Cernunnos had been usually depicted with such a torc around his neck.

Researchers at the museum estimated the find to be a bit more than 3,000 years old. The ornament is a contiguous twisted gold cord with a 730 g weight. The incredible length of the item is impressive. As for this type of finds, it’s really giant-sized. According to one of the versions, this torc might have been worn by a pregnant woman around the belly as a protective talisman. According to another one, the ornament had been worn by an animal around the neck – for instance, before being sacrificed.

The find is one of a kind. Previously there occurred torcs that had been worn around the waist. But such a large one never happened before. Furthermore, the item had been obviously intended not for wear on the waist as it has a too big girth (I don’t agree with it though. What if the owner has a wider-than-usual waist?)

Neck-rings of that kind had been made from solid gold. After being stretched out, they had been twisted many times. The main peculiarity is that the gaps between the twists are measured precisely along the torc’s entire length.

The minimum value of the find has already been estimated at ?150,000. According to British law, museums have the preferential right to buy the item from the finder. More discoveries, made with or without a metal detector, can always be found here.