Until the first half of the 20th century, one of the most important but rarely mentioned problems were inconveniences connected with military fuel containers. In 1936, the German government announced a competition to create a can for these purposes. 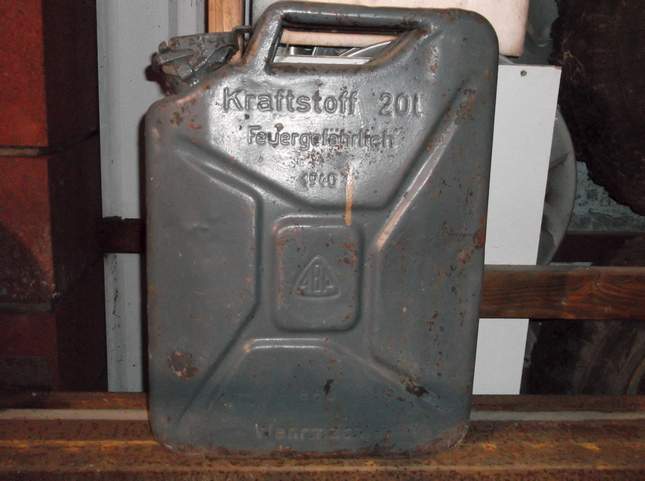 As a result, the M?ller engineering firm under the guidance of chief engineer Vinzenz Gr?nvogel created a fundamentally new design which became known as Wehrmachtskanister. 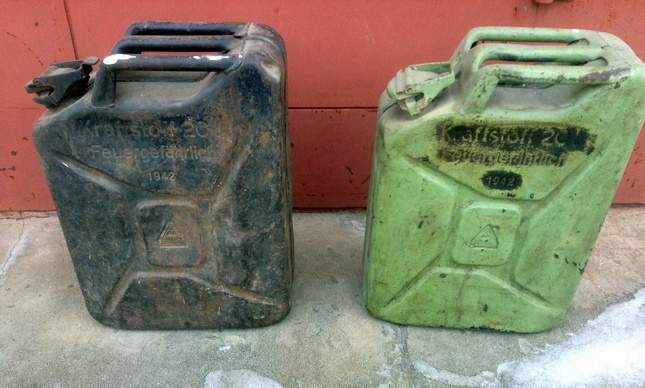 That sample was not only much more convenient, but also more durable than its predecessors which had looked like shaped parallelepipeds with two – upper and lower – welded flat bottoms and handles made either of wire or a curved metal strip. Such containers had been not only inconvenient in carrying and storage, but also leaking because of a good many welded seams.

The new jerrycan, however, had a capacity of 20 liters, weighed 4 kg, was three-handled, with a cam-lock lid, and consisted of two pressed steel plates joined together by welding. Thanks to a single welded seam, such a can was considerably less leaky as well as more convenient. The handles were designed in a way of enabling 4 empty cans to be carried by one person, using the outside handles, or 2 full cans using the middle handle. The cross on the side helped strengthen the container allowing up to 5 jerrycans to be stacked in a row. The shape of the can fit into a rectangle thus simplifying transportation and storage, whereas a built-in air pocket on the top made it float in water. The jerrycan had a convenient neck as it didn’t require a funnel for filling, moreover, it could be opened by hand without using any tools. An air pipe from the neck was connected with the air pocket on the top, therefore equalizing the pressure inside and outside of the can as well as helping with smooth and accurate pouring when filling or emptying it. Also, the canister helped prevent the contents from overheating. In 1940, the jerrycans suitable for use with other liquids (oil, water) began to appear. To differentiate between them, the cans were painted in different colors. 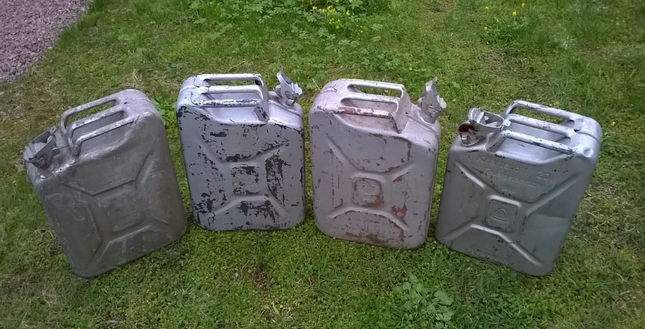 Industrial production of the new canister started in 1937, and although by 1939 the number of jerrycans in warehouses was estimated in the hundreds of thousands, it was carefully concealed from the outside world until 1940. 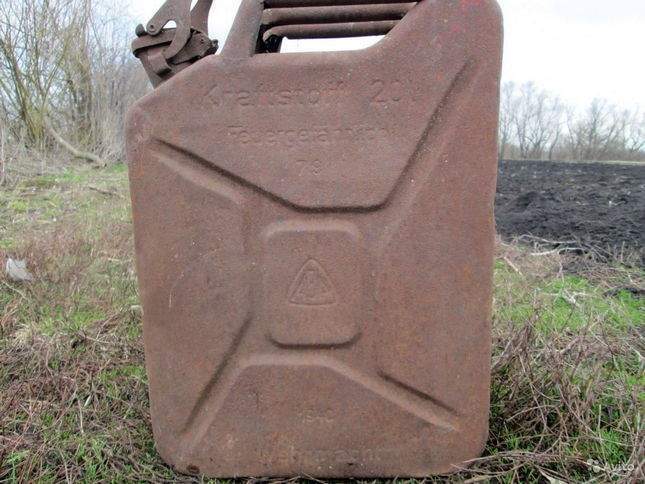 The Americans and the British gained access to the cans at roughly the same time. The British captured several specimens in France and later put them into production unchanged. The situation with the Americans was somewhat less prosaic.

In 1939, after completion of his contract in Germany, American engineer Paul Pleiss was planning a road-trip from Germany to India. The route was expected to be long and hard, so he snagged three water cans. During his journey the engineer was amazed at how convenient and well-thought-out the design of the canister was. Having returned back to the United States he began to persuade the officials to launch the production of the same container. At first, the military were far from using the introduced sample design, and even after finally agreeing to, they made a significantly different specimen. 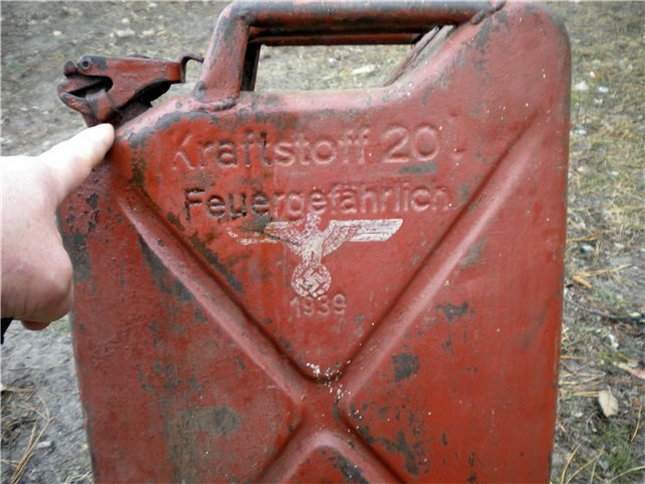 The container consisted of a single pressed steel plate with welded bottom and upper part, but not of two plates welded together at facets, and also had a wider neck with a screw cap. And although such a can was easier to wash and quicker to fill and empty, it required a special tool for unscrewing the cap as well as a funnel for filling. Besides, the canister itself was terribly leaking because of a good many welds. 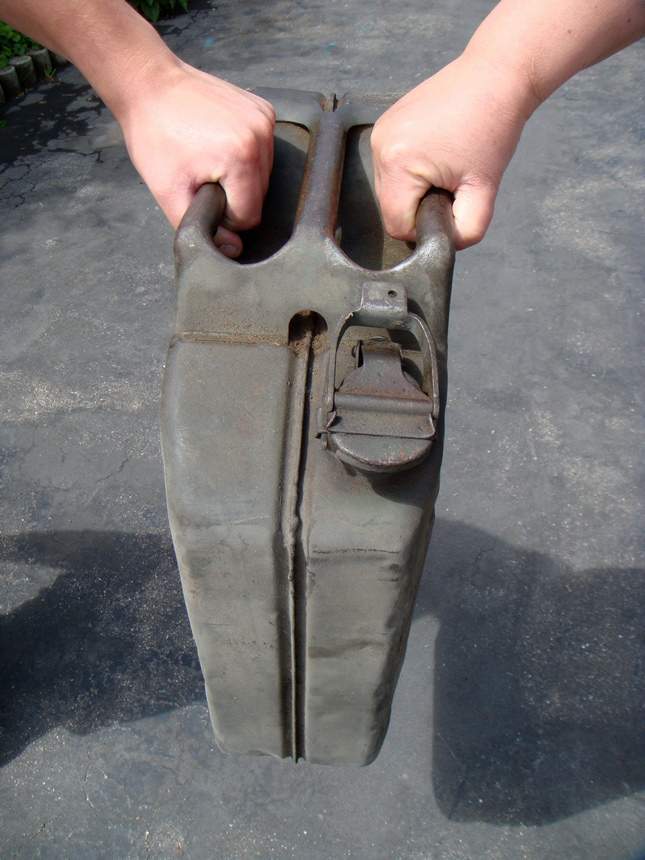 While conducting military operations in North Africa the Allied forces felt the urgent need for good quality jerrycans. Then a days, fuel was not only slopping out, but also leaking and overheating while being stored because of low-quality containers (usual rectangular 20-liter wire-handled tin cans for kerosene storage) as well as the pouring process which was technologically unfeasible. An inspection in the rear of Montgomery’s army revealed 40% of fuel losses were due to imperfect containers. Not incidentally, British Brigadier General and historian Desmond Young wrote, “No one who did not serve in the desert can realize to what extent the difference between complete and partial success rested on the simplest item of our equipment – and the worst”.

In late 1942, the British began actively producing jerrycans. By early 1943, 2 million British cans were delivered to North Korea, and as much as 21 million of them were produced by the end of World War II. Thus, it was Britain that kept the Allied army fully supplied with the containers for fuel and other essential liquids. 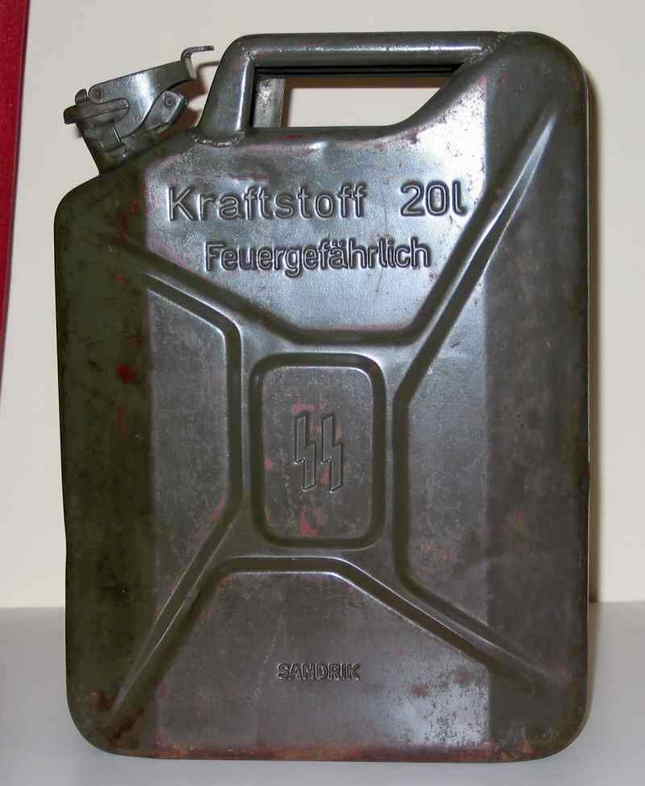 After the end of World War II, the jerrycan’s design has lost none of its relevance and has survived to the present day with minimal changes, while the jerrycans themselves are now being produced in many countries around the world.

2 Responses to Found: WWII German Jerrycan. A glimpse of history